SOLAS features music by Haydn, Handel, Vivaldi, Purcell, Alain and Vinci arranged by Gerard McChystal and Christian Wilson along with original works by Barbara Thompson and James Whitbourn. The album not only highlights beautiful sounds from the soprano and alto saxophones but also features the incredible energy of the sopranino saxophone, rarely recorded. 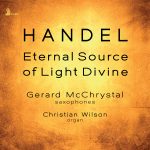 Recorded at The Chapel Royal of St Peter ad Vincula, The Tower of London
Engineered and produced by Ken Blair • Edited by Will Anderson and Charlie Hembrow
24bit, 44.1kHz hi-resolution recording and mastering

“…here is an unusual duet which turns out to be a great discovery… his [McChrystal’s] way of playing is transcendent, and from this mixture comes new harmonies and shimmering sonorities which make this recital not lunar, but solar.” (Classqiue HD)

“From the mixed album ‘Solas’ which I would definitely recommend you investigate” (Classic FM, Rob Cowan)

“Definitely worth hearing … not only for the stunning musicianship, but also as a diversion within your music collection. Now I wish I could see more unexpected and pleasant surprises drop into my mailbox.” (Classic Music Sentinel)