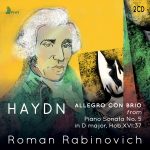 “…once again responding with personality and imagination to Haydn’s seemingly limitless invention… It’s quite a journey through Haydn’s piano sonatas, and as his cycle unfolds, it seems as if Rabinovich is going to be as individual a guide as the likes of Bavouzet and Hamelin in their recent surveys and selections”  (Gramophone)