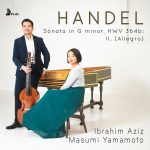 5–8. Sonata in G major for Viola da Gamba and Basso Continuo, after HWV 372
(transcribed from the original for violin in A major by I. Aziz )

“The playing is beautiful, with some wonderfully poignant gamba sounds from Aziz, who also displays a deft virtuosity on the instrument, while Yamamoto provides an impressively responsive accompaniment… This is a thought-provoking and musically very satisfying CD.” (Early Music Review)

“Ibrahim Aziz and Masumi Yamamoto bring out the cantabile in Handel’s writing…his [Aziz] playing is full of breath and mystery… The harpsichord gleams under Yamamoto’s touch… The Prelude in D minor, an arrangement of the opening to the Keyboard Suite No 4 in D minor, is utterly gorgeous. Aziz weaves an improvisatory spell of arpeggiac magic; more of this, please. The sound, engineered and mastered by John Croft, is lovely throughout.” (Gramophone)

“This is a lovely disc, a beautifully balanced programme. Ibrahim Aziz plays with a lovely lyrical tone, easy grace and a nice fluency in the more virtuoso passages. This engaging programme not only showcases Aziz and Yamamoto’s fine playing, but gives us a flavour of the sort of programme that an 18th century viola da gamba player might have assembled” (**** Planet Hugill)

“Aziz does not disappoint with his masterful arrangements… He and Masumi Yamamoto deliver an eloquent and accomplished performance… Every movement [from D minor Suite, HWV448] offers something to savour – antiphonal passages, poetic sequences, exquisitely ornamented repeats, to name but a few, and again as elsewhere, Aziz and Yamamoto deliver a memorable performance.” (Julie Anne Sadie Goode, The Viol [Viola da Gamba Magazine])

“Ibrahim Aziz plays throughout this well-filled, warmly recorded CD with strong but malleable tone and an agile technique…. Both players achieve beautiful unanimity of phrasing in the three-part writing of the C major Sonata that concludes this recommendable recital.”(The Strad)

“This is a delightful collection, and the two players’ commitment to and command of this repertoire shine throughout”(Classical notes)

“This CD is a beautifully resonant and absorbing record of a sensitive and thoughtful collaboration.” (Early Music Society of Queensland)

Handel wrote a number of obbligato gamba parts with orchestral accompaniment, notably in the cantata Tra Le Fiamme, the oratorio La Resurrezione and the opera Giulio Cesare, but it is less obvious how he treated the instrument elsewhere as a solo instrument. One clue lies in an autograph manuscript of a violin sonata, where at the foot of the first page the composer writes a few bars of the opening an octave lower in the alto clef, and labels it ‘per la viola da gamba’. It is my feeling that transcriptions like this were fairly common, and may be a reason why there isn’t more surviving solo music for the gamba from the early Georgian period in England including by Handel – the solo gamba very likely played existing music written for other instruments. I am using this hypothesis as a basis for this programme. As well the original sonata for gamba and continuo that Handel had left us, I will be including several transcriptions which I’ve made of his other works, as well as pieces which are attributed to him such as the sonata in C major with obbligato harpsichord and one sonata from a recently unearthed collection called the Kassel Sonatas. (Ibrahim Aziz)